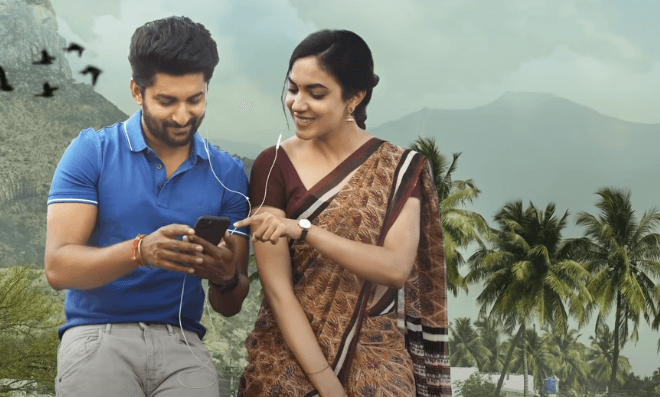 Here are the Details of Tuck Jagadish’s cast, Producer, Release date and more

This is the Second film for Nani with Shiva Nirvana, ‘Ninnu Kori’ was Shiva Nirvana’s First film, which was a Blockbuster.

So this Hit Combination Raising Expectations For ‘Tuck Jagadish’.

Buzz about ‘Tuck Jagadish’ is Inspired from The Old Film ‘Balarama Krishnulu’, in which Shobhan Babu and Dr.Rajashekhar played as brothers.

Taman is the Music Director for ‘Tuck Jagadish’.

Tuck Jagadish is Produced by Sahu Garapati, Harish Peddi under the Banner of ‘SHINE SCREENS’

Other Important Cast In Tuck Jagadish

First Look Poster Reveals The Drama and Action That is to be There in The movie. Probably Story Happens In Rayalaseema or Near TamilNadu Border of Andhra Pradesh

Nani in his twitter Sharing this picture mentioned as Jagadish Naidu A.k.a #Tuckjagadish.

In The Pic his Formals , meals, Knife and his Expressions each telling its own version of Tuck jagadish

Since they named it Tuck Jagadish , there must be a story around his Tucking shirt

In Ninnu Kori which is  Nani’s and Shiva Nirvana’s First Combination, Nani Played a Subtle role as a Painned lover.

Now, Everyone is Eager about Nani’s Characterisation in Tuck Jagadish

Shiva Nirvana is Named for Sensible dramas , which were hugely successful . One is Ninnu Kori and another one is Majili starred Naga Chaitanya and Samantha which was Critically Acclaimed

Nani is meant for Success, with his successive blockbusters .

He is known for bringing life to new stories and technicians

Tuck Jagadish Movie will Release in April 2021, Probably in Theatres Only, since movies started showcasing in Theatres now.

Nani also told his fans at the time of ‘V’, that  we will make sure my Next film will release in Theatres

Nani has Kickstarted shooting for ‘Shyam Singha Roy’ , He shared the video of his father clapping in Muhurtham

Shyam Singha Roy , which is being helmed by Rahul Sankrityan

Nani’s another film which is directed by Vivek Athreya, Brochevarevaru fame, Titled as ‘Sundaraniki Tondarekkuva’

Interesting Aspect of this movie is Nazriya,who won million Hearts with her performance in ‘Raja Rani’